A Beautiful dream of owning a Siberian Cat

We are a family of animal lovers and live on a small-holding just outside Pretoria, South Africa, with our 5 dogs, 6 horses and 2 parrots. As a child I had a beautiful long haired white cat called ‘Wittes’, with a blue eye and a green eye, who was also deaf. I adored him, but developed terrible allergies from him. I was adamant that my parents do not give Wittes to another home, and preferred to rather face my allergies. When my darling boy eventually passed away from natural causes, I was not allowed to have another cat again. Because of the severity of my allergies, I had to make peace and resign myself to the fact that I could never be a ‘cat person’. I focussed all my love and attention on dogs and horses. As a family we also enrolled as ‘Puppy Walkers’ for the SA Guide Dogs association and so far, we have raised 3 Labrador guide dog pups of whom 2 went on to serve as the very special ‘eyes’ for their blind owners. The one who didn’t qualify due to elbow trouble, came ‘home’ and now Xavy is our own- providing daily ‘Labby-love therapy’.

I believe that there are many people who are in the same position as I have been all these years. To my delight, I discovered the Siberian Forest cat, which is known for its low to negligible Fel d1 protein levels. I visited my, now dear friend and mentor, Cherylee Powell who introduced me to her beautiful cats, and that is where my interest in these amazingly special cats began. Another reason for my interest in the Siberian breed, is that my aim is to start up a ‘Creature comfort pet therapy’ program for the elderly and disabled children and adults, and the hypoallergenic qualities and personality traits of the Siberian cats makes them perfect for that part of my plans. 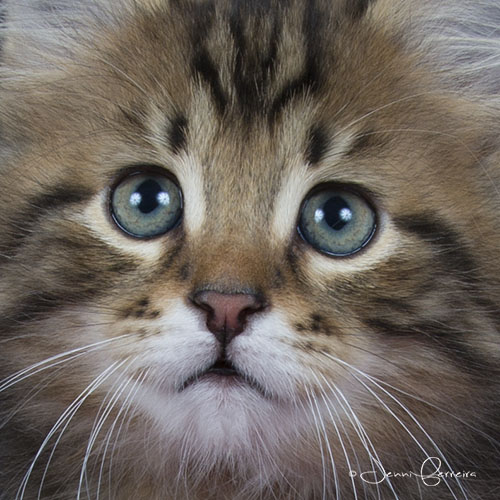 Panya Manchzhury was the first of our darling cats to arrive at our home from Russia. We anticipated the big day of her arrival with great excitement, deep down quite worried about the fact that we are all allergy sufferers to some extent- my worst allergy being to cats!! When she arrived at our home, Panya stepped out of her cargo carrier with such a confident attitude, as if to say “HELLO AFRICA!! Where’s the fun and the action?” That night I slept in her ‘safe room’ with her and continued to do so for several nights to follow…. NO ALLERGIC REACTION… Phew!! I was over the moon with joy and relief. A HUGE “THANK YOU” goes to Natalia Khomyak of the Manchzhury cattery in Russia for sending this very special darling to us. She was so well socialised, confident and extremely playful- to the extent that we play ‘fetch’ with her favourite toys! Her favourite ‘snuggle friend’ became our Great Dane, Tamar, and her favourite playmate is Xavy, the Lab. The Border Collie, Mulan, has yet to teach her to be an ‘obedient cat and be herded’! Our new journey had started off very well, and after a nearly 40 year ‘dry spell’, I was so blessed to learn all about the joys of being a cat’s human again. What a difference to only having the 6 dogs in the house! I had a lot to learn and found myself surrounded by new friends who so kindly came alongside me whenever I was unsure.

The next addition to our family was when Krasotka, Perseya and Alyonushka arrived in our home. Sadly these girls were at the brunt of the Lufhansa pilot strikes of 2014 and were stranded at Frankfurt airport for 4 days en-route to SA. They arrived in SA, dehydrated and extremely stressed after their gruelling travels. They took a little longer to settle confidently into to their new African home, but made brilliant progress. They are very sweet and are loved to bits- each unique in their own way. History was once again made in our home, when Panya gave birth to her first litter of 5 gorgeous kittens on 22 March 2015, and again when Krasotka proudly presented her 4 bundles of fur 5 days later. All were healthy and perfectly created, and was the hardest thing to tear yourself away from the nursery! These kittens were just the cutest little things on earth!

The cold long weekend of August 2015, welcomed the arrival of Artekatz Bentley of Uzuri into our home. He was 11 weeks old and simply the most loveable, cuddler ever known to man! His quiet, ‘forceful’ love has stayed with him and the vibration of his deep constant purr is the most wonderful sound to hear and feel when he is cuddling on your lap. He has developed into a strapping young stud, who has just fathered his first litter of 6 beautiful kittens. We look forward to his upcoming prodigies, and trust that his beautiful, loving personality and handsome features will be carried forward to the next generations.

From there on, Perseya, out turquoise eyed, bi-metallic/silver girl, had a beautiful litter of 6 kittens in July 2015. They are all blessing the families who adopted them, and it is so heart -warming to hear of the joy that they bring, and to receive photos of their progress as they have matured.

Our only little Neva Masquerade girl, Ragtime Mademoiselle Coco of Uzuri, joined the cattery in October 2015. Her striking blue eyes memorise all who gaze upon her, and she is always at the front of the welcoming committee when visitors come to the cattery. She has a permanent love affair with our Great Dane, but also loves everything and everyone else who ever come across her path.

We have been building a new home on a small farm for the past 3 years, and constant delays on the building project, and an imminent move to the new cattery there throughout the year, meant that all breeding was put on ice after April 2016, We will continue with the new breeding season shortly, once all the adult cats are settled happily in their new home. Watch this space for the pics of the progress and settling into the new cattery …!